The first Black Panther Chapter in a southern state was established in Winston-Salem, North Carolina. It was an active political force from 1969-1978 and over the course of that time grew to become one of the most influential chapters in the region. The chapter’s primary occupation was with alleviating the needs of black communities in the area. They offered many service programs, including free sickle cell anemia testing, an ambulance service, and free breakfasts for schoolchildren. The chapter was relatively unique in its community development oriented approach with what the National BPP called “Survival Programs”. 1

One of the most influential leaders of the Winston-Salem chapter of the Black Panther Party was Dr. Larry Little, who led the party through it’s most successfully active time period. He went on to obtain a bachelor’s and law degree and now teaches as an associate professor at Winston-Salem State University. 1

1. Dr. Larry Little speaking at a vigil for Trayvon Martin’s death in Winston-Salem (2013)

In 1970, Little was jailed after refusing to quit the Black Panthers at the prospect after being arrested for disorderly conduct and attempting to incite a riot. In reality, he got into an altercation with police officers after they ripped down posters hung by Little that said “I’m Black and I’m Proud.” 1

In 1974, Larry Little became actively involved in the Joan Little case, who faced the death penalty for a crime committed in self-defense. Her trial, for the murder of the Washington, NC prison guard who raped her, incited protest across North Carolina and the nation. 1

(More information on her case can be found here) 5 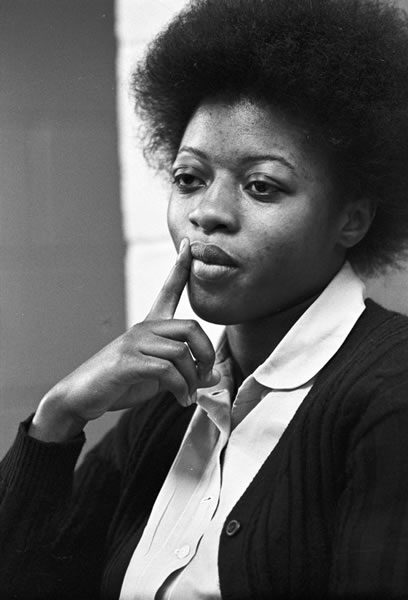 In 1975, Dr. Larry Little’s life was threatened by a member of the KKK. His name was on a list of BPP Leaders slated for assassination. Below is the issue of the Black Panther Intercommunal News Service that covers the story on the front page. 2

In 1976, Little resigned as head of the Winston-Salem chapter of the Black Panther Party and two years later, the local organization dissolved. 1

Fast forward to 2012, and Winston-Salem unveils a Black Panther Party historical marker honoring the impact the chapter had on the community. 3 This formal recognition made the previously vernacular memory of the chapter part of the dominant narrative of local history. The plaque frames the chapter in a very particular way that, while honoring the service, diminishes the Black Power and ignores the long history of push-back that the southern chapter received from the white community.

3. The historical marker honoring the Winston-Salem chapter of the Black Panther Party

In 2015, a resident of Henderson, NC, started a petition to have the marker removed in response to a rally in Charleston, South Carolina. The rally was held by the New Black Panther Party (separate from the BPP) and allegedly called for the killing of white people. 4 Though the two parties are unaffiliated, the sentiment is clear; not everyone in North Carolina approves of honoring the chapter.

The marker made a material site of memory by physically marking the landscape, but this honoring occurred more than 40 years after the Winston-Salem chapter of the Black Panther Party ceased operation. It took that long for the work the organization did to be officially recognized because of both the continuation of the problems the party sought to address and because the process of forgetting in the broader social consciousness had to begin before the act of remembering could take place. The memory is processual, and developed and continues to develop over time. The legacy that party has nationally is tumultuous, and the local one mirrors it in complexity. The historical marker remembers the good the chapter did in the community but forgets the upheaval, revolt, and most importantly black power, in it’s official memory of the site. The particularity of Winston-Salem, but the universality of the Black Panthers nationally, makes for an interesting cross section of memory in this thread. The particular memory of the community development of the local chapter contrasts with the universal memory of protests and violence of the national party. 6

It is important to note that through my active participation in remembering this site, the memory is narrativized and therefore distorted and incomplete. 7 What narratives are left out of my analysis?